I have one hour ride each way to work ... when i am not playing the Nintendo DS that's what i do Posted by DreamSphere Voom at 12:20 AM No comments:

Email ThisBlogThis!Share to TwitterShare to FacebookShare to Pinterest
Labels: Drawings

a Month with a Nintendo DS

I have got the old Nintendo DS a month ago.
i was told that the NDS have a huge amount of games, 90% of these games are made for kids, but the system is can easly add hours of enjoyment to your life even when your not a kid.
some of my friends that have a DS long time ago bought the system and played once or twice and left it because it just felt too childish.

Nothing beats Tetris, it the ultimate casual game... it the game that made casual gaming industry but the Tetris DS doesn't end with clearing lines and breaking you own high score, Tetris DS is full of different tetris game verities from the Classic tetris to tetris puzzles and mission.
And the best is that its got Internet Mutiplayer and you can build up your world rank and become a tetris champion.

Well there is nothing much to say about this game... you'll all ways want to play a new super mario.
and the game match the mario standards you'll love it, I love it its a must with a NDS System

Can you remmber the first time you had to explore Dracula castle and beat up monsters?
well even you haven't played and past castlevania games
you will not regret playing this game
this game lets you explore another Dracula castle... but now the graphics are detailed more then ever.
The games insures hours of explore and soul collection weapon upgrades and secret passages.
the game graphics is simply great and smooth animation, slashing a zombie was never that fan.
the game is gory and not for kids...

This is a turn based strategy game.

the game story happens after a great astroid strikes the earth and kill most of the humans on earth. the earth is now lead by anarchy and chaos.
you'll need to lead a group of a small army that believe that there is still hope for the human race
the game is really challenging and you'll work your mind like in a chess game.
the amazing feature is the Internet multiplayer, there is a big community that plays this game world wide and you'll have to build up your rank.

Ninja gaiden is all so a game serias that goes way back and started at the NES.
but this game not like previews Ninja gaiden games, innovates a new gaming experience thanks to the DS touch screen, with the stylus you get the feeling that you are actually holding the sword and slashing the monsters with various attack patterns.
the game design is great and a little bit nostalgic with his pre-rendered background it kinda send you back to those old PSX games.

When you first open the game and fallow the opening scene the game looks very childish.
Its a puzzle game and its really challenging one.
with a nice story line to fallow and some mind blowing puzzles (math and logic).

This is really a kids game, kids theme... very colorfully cute characters and when you start playing the game you think... "why have i bought this game" after playing with the game more then 10 min the game acctually pretty good and challenging and very innovating... using the stylus to help kirby move from stage to stage.
the game is fun and very hard at the same time
If your looking for a new side scroller it just might be it.

This is one of the first games i tried for the DS... the game is pretty fun and doesn't take alot of time... you just have to practice a minute per day but you find your self coming back to try different challenges that the game offers. it a unique game for the DS and its a must have like the tetris DS. 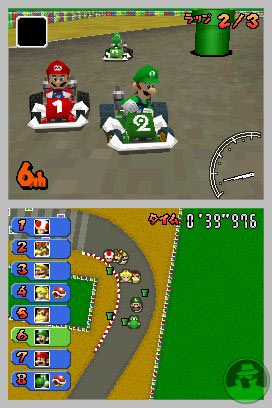 Do i need to say more???
if you haven't played mario kart in the SNES your a gaming sinner
this game is absolutely fun with awasome graphics, Internet multiplayer option... alot of tracks and game modes

what more can you ask?! This game was actually a surprise for me... a serious racing game in a small handheld screen.
doesn't sounds that promising
well the game actually does the job. its a fun game and very good... the graphics is nice and nicely done

you have a long single player mode to beat and many game options to open.

i hope that in the near future i'll build up a list for the Sony PSP
Posted by DreamSphere Voom at 10:50 AM No comments: